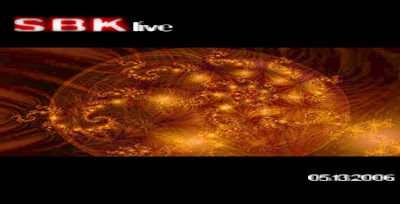 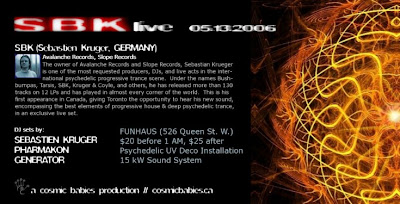 
The owner and founder of Avalanche Records and Slope Records, Sebastian Krueger is one of the most requested producers, DJs, and live acts in the international psychedelic progressive trance scene. Under the names Bushbumpas, Tarsis, SBK, Kruger & Coyle, and others, he has released more than 130 tracks on 12 LPs and has played them in almost every corner of the world.

His tracks and remixes have been featured on almost every major psychedelic label in the world, including, to name only a few: Spirit Zone, Global Trance Network, Spiral Trax, Transient, Free Form Records, AP Records, Green Ant Records, Yellow Sunshine Explosion, Leguan Records and others. Some internationally renowned international DJs like John '00' Flemming are consistently featuring SBK in their sets.

This will be his FIRST appearance in Canada, giving Toronto the opportunity to hear his new sound, encompassing the best elements of progressive house and deep psychedelic trance, in an exclusive live set.

This is SBK's first solo effort and the result was an instant classic in the vein of the German minimal progressive sound. Most people in the psy-trance scene will recall the summer hit "Morgenlatte" and all of its various remixes. This track alone was a huge influence in defining the sound of what would become the sub-genre of "morning progressive" at psychedelic festivals throughout Europe.

After the smash success of "Morgenlatte", SBK followed it up with a slightly harder-hitting album. Still with the percussive elements of before, he upped the ante with a few morning dancefloor smashers, and kept the rest of the tracks in the percussive vein. Standout tracks that have appeared on psychedelic compilations include Retro and Demosong. This last track will get tired morning crowds on their feet in no time.

This album marks the beginning of SBK's journey into sublime psychedelic progressive tapestries. Evolve has it all with groovy progressive rythms, super clean and intelligent percussion and subtle dreamy ambient accents. This really is one of those lesser appreciated early progressive gems which deserves greater attention. Standout tracks include "Lakota" and the title track "Evolve". Most of the rest of this album is simply outstanding as well.

With this album, SBK's sound achieved a new level of dynamic style and composition. The tracks on "Borderline" exhibit SBK's new confidence to blend tribal progressive house rythms with his already impressive knack for deep psychedelic landscapes. This is definitely a new and welcome sound for the psychedelic trance faithful while also attracting attention from the other progressive genres. Standout tracks include the not-to-be-missed dance floor driver "Rubbaworm", and the deep hypnotic "Borderline" but, as with Tarsis - Evolve, the whole album is very strong.

Here, SBK teamed up with Greg Coyle (of Purple Lunar fame - he wrote the banger hit track "Subtle Thrust") to churn out another whole album in the percussive deep-yet-dancey style of "Borderline".

However, the addition of Greg Coyle to the mix appears to bring with it more blatant sex appeal and in-yer-face house elements. It only takes one glance at the cover art and track names to see this, and get a sense for where these guys are coming from with this release. From anyone else, you'd expect to get fun dancey house. From these guys, it transcends house with perfect percussion and incessently hypnotic psychedelic elements. Standout tracks include the genre-crossing hypnotic hit "The Witness Remix" and the intense psycho-builder "Kiwi-Rider".

This is the first compilation released on SBK's new progressive house sub-label Slope, which also features SBK's brother making his own mark with a recent release and a bunch of excellent remixes under the moniker Philo. Check out the deep funky psychedelic journeys on tracks like SBK - Deep Down Inside and Kruger & Coyle - Love Juice.

We encourage everyone to take the time to get to know SBK's music to make the experience that much better on May 13th.

IN ADDITION
Neil Gibson: This event will also feature the UV artwork of Toronto's own Neil Gibson. Come see why Neil has joined the global trance jet set, having recently shown his work at parties in Europe and New York City.
Live Performers: In addition, there will be a number of live performers and dancers giving the party a unique festival-like atmosphere.

INFO
Venue: Funhaus, 526 Queen St. West, Toronto, Ontario
Price: Admission is $20 before 1 a.m. and $25 after. Party expected to run past 5am, so prepare yourselves!

We look forward to seeing all the familiar faces and hopefully a few new ones as well. Mark your calendars and spread the word...